Our house competitions are always varied and competitive. The latest competition was themed on "Women from History".

Congratulations to Ayman for winning.  He collected 200 points for Trojans to keep them top of the leaderboard.

Overall Trojans lead the house competition with Argonauts in second and Kelts in third place. To find out more about our houses please click here.

One of the entries was an excellent biography on the llittle known astronomer Cecilia Payne- Gasposhkin. 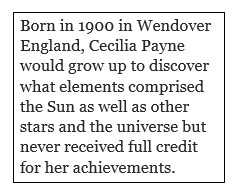 Cecilia Payne was a very talented scientist, but her mother refused to pay for her college education, so instead she won a scholarship to Cambridge. Cecilia Payne completed her studies at Cambridge but they wouldn’t give her a degree because she was a woman. So she decided to move to America and there she was the first person ever to earn her PhD in Astronomy.

Not only did Cecilia Payne discover what the universe was made of, but she also discovered what the sun was made of too. Unfortunately she was never given credit for this and instead her fellow astronomer, Henry Norris Russell got the credit as he told her not to publish her papers. Cecilia Payne is also the reason we know about variable stars (stars whose brightness we can see from earth).

Cecilia Payne was the first woman to be credited to full professor from Harvard and inspiring more women into the field of Science.

Cecilia Payne was amazing and everyone should know her name as the woman who discovered the composition of the universe.